Another news piece on physician migration and shortages 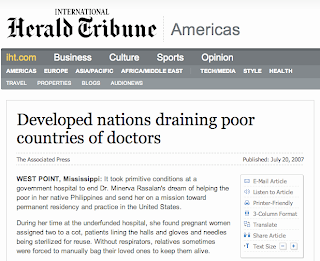 Another piece on physician shortage from the Associated Press.

"Dr. Fitzhugh Mullan of George Washington University believes the U.S. — which is facing a shortage of doctors — must stop looking elsewhere to fix its problems. He compares the practice to "poaching" and said it amounts to poor citizenship in the world community.

Every doctor drawn to the U.S, Britain, Australia and Canada from poorer nations leaves a hole that likely will not be filled, he said.

Mullan's research shows that areas such as sub-Saharan Africa (13.9 percent), the Indian subcontinent (10.7 percent) and the Caribbean (8.4 percent) lose large numbers of doctors to the big four nations. But there is little reciprocation. The U.S. exports less than one-tenth of 1 percent of its doctors abroad, for example.

"That creates enormous problems for the (source) country and for the educational and health leaders in the country who are attempting to provide healers," he said."

The loss of doctors in Africa, where millions have been infected with HIV and AIDS, is especially acute.

"What goes around comes around," he said. "We are in a continuum. What South Africa loses to the developed world, to the United States say, we gain from Uganda."

Facing with enormous lost of health workers from external migration, the Government of Guyana resorted to a punitive measure to prevent graduating nurses from moving out of the country. Travel ban has been issued so that they "cannot leave the country without permission for the next three years." The Guyana Human Rights Association came out against this measure. They argue for a more constructive measures that would improve working conditions as well as prevent out-migration. According to the Nursing Association Head, the health system is poorly conducive to the work of these health care staff. ##### Counter Migration By Effective Policies Not Vindictiveness Executive Committee Guyana Human Rights Association June 2 2007 ghra_guy@networksgy.com In a desperate bid to quell the outflow of skilled Guyanese, the Public Service Ministry (PSM) has extended to domestically trained nurses, the clumsy and punitive measures applied to those trained overseas. Participants about t