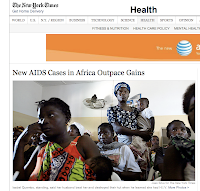 The New York Times has an article by Sharon LaFraniere entitled "New AIDS Cases in Africa Outpace Gains". Using example from Mozambique, the article presents one key message that the lack of health worker is a major obstacle to effective program to prevent mother-to-child HIV transmission. See excerpt below . . .

In the Mozambican province that includes Beira, the new focus on prevention
represents a huge come-from-behind effort. But with just one nurse for each
8,000 residents and AIDS still regarded largely as a humiliation, success is
elusive. Last year, only one in 12 mothers-to-be who needed preventive
medication in Mozambique received it, the Ministry of Health said.

At the Chota health clinic near Beira, a single nurse, Anna Manocua,
struggles vainly to track infected mothers while caring for an average of 60
patients a day. How many receive their medication is just a guess. Her
handwritten log suggests that at least eight women have missed their drug
doses since December. There is no hope of finding them: Ms. Manocua did not
record any addresses or cellphone numbers.

Stephen S. Gloyd, the director of Health Alliance International, said the
Chota nurse epitomized the problem. His nonprofit organization is trying to
jump-start the province’s mother-to-child prevention program. But he said,
“it all comes down to the same, single nurse.”

Facing with enormous lost of health workers from external migration, the Government of Guyana resorted to a punitive measure to prevent graduating nurses from moving out of the country. Travel ban has been issued so that they "cannot leave the country without permission for the next three years." The Guyana Human Rights Association came out against this measure. They argue for a more constructive measures that would improve working conditions as well as prevent out-migration. According to the Nursing Association Head, the health system is poorly conducive to the work of these health care staff. ##### Counter Migration By Effective Policies Not Vindictiveness Executive Committee Guyana Human Rights Association June 2 2007 ghra_guy@networksgy.com In a desperate bid to quell the outflow of skilled Guyanese, the Public Service Ministry (PSM) has extended to domestically trained nurses, the clumsy and punitive measures applied to those trained overseas. Participants about t